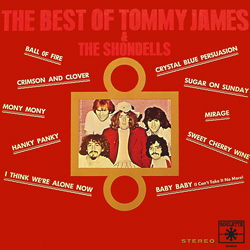 THE BEST OF TOMMY JAMES &
THE SHONDELLS
1969 - Roulette Records 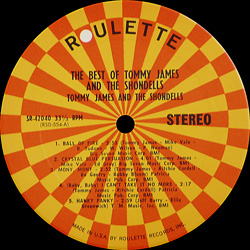 THE BEST OF TOMMY JAMES & THE SHONDELLS, released in the fall of 1969, was the group's second Greatest Hits LP and is by far their biggest selling album (over 10 million copies to date). During 1968/69, Tommy James and the Shondells sold more singles than any pop/rock act in the world, including The Beatles and their phenomenal popularity was reflected in this album which, by the end of 1969, had gone triple platinum with no end in sight.

Of special note to the fans, is the fact that this was the only TJ & S album on Roulette to contain their million selling hit "BALL OF FIRE".