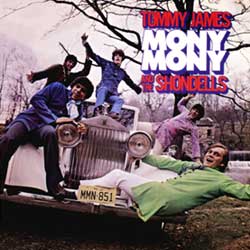 "Songs Like Mony Mony
aren't really written,
they're sort of hanging in space -
waiting to be found -
I'm just thankful we found this one." 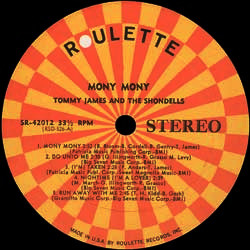 What can you say about the three minute burst of sonic energy called "Mony Mony" that hasn't already been said? - On the radio, daily, for over thirty five years - recorded by everyone from Billy Idol to the Boston Pops Orchestra - played at major sporting events - and engrained into the public conciousness like few songs ever in music history! Yet, in the Spring of '68 it was nearly rejected as an A-side for being "Too Bubblegum" - "Too Silly" - "Too much of a throw-back to the early sixties", only the insistance of Tommy and the group forced Roulette Records to release it as a single - a close call!

The "MONY MONY" album, released that summer, was loaded with hit singles - ala - "Mony Mony", "Get Out Now", and "Somebody Cares"... but for Tommy & The Shondells, the big story of this album was the fact that, amid the fine production work by Bo Gentry & Ritchie Cordell, and the great arranging by Jimmy Wisner & Gary Illingsworth - the group took their first steps into the studio alone and began quietly producing their own songs.

The first two, "I'm Taken" and "Gingerbread Man", were considered by many at Roulette to be the best tracks on the album after "Mony" - and gave TJ & company the confidence to consider producing their own records, permanently - a dream that would come to fruition the following year with "CRIMSON & CLOVER"!