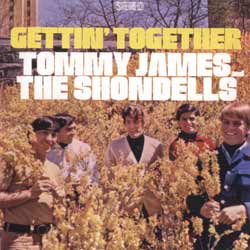 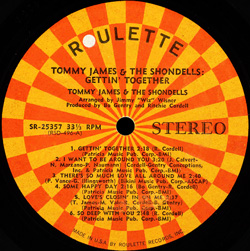 It was June of '67, the "Summer Of Love" - exactly one year since Tommy James and The Shondells burst onto the music scene - and what a year it was!! Voted Billboard Magazine's "Top Male Artists of 1967," their record sales and Top 40 radio success exceeded all expectations.

"Gettin' Together", the group's seventh back-to-back gold single, was zooming into the top 20 as the GETTIN' TOGETHER album was being released - even though it closely followed the wildly successful "I THINK WE'RE ALONE NOW" LP, musically, it couldn't have been more different.

Hauntingly beautiful melodies & lush arrangements, mixed with subtle humor, revealed a whole new side of Tommy James & The Shondells and gave this album a unique and memorable flavor that represented the best of this pre - "Sgt. Pepper" 4-track era.