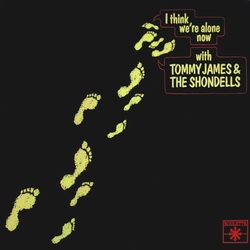 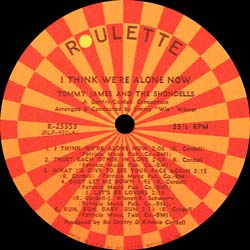 "I Think We're Alone Now" was the 4'th smash hit single in a row for Tommy James & The Shondells, and marked a major evolutionary step in both the sound and style of the group. It also began a long-term relationship between Tommy, producers Bo Gentry and Ritchie Cordell and musical arranger Jimmy Wisner. Over the next 2 years this team would crank out no fewer than 7 gold singles and 3 gold albums. The first of which was the classic: "I THINK WE'RE ALONE NOW" LP.

Released in February of '67, it was highly acclaimed by industry vets who, up until then, hadn't paid much attention to the band. It boasted three monster hits from the group "I Think We're Alone Now", "Mirage", and "I Like The Way" plus a slew of great album cuts all of which received much radio airplay. As if that weren't enough, R & B artist Verdelle Smith gave Tommy his first cover recording credit with her version of "(Baby, Baby) I Can't Take It No More", released on Capitol Records.

Hits, hooks, staccato eighth notes and galloping guitars - this was the album that said it loud and clear: Tommy James and the Shondells were here to stay!!