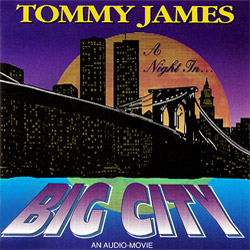 "A NIGHT IN BIG CITY was an idea
that had been rolling around
in my head for a couple of years...
an experiment from beginning to end.
I guess you could say it
was a DVD without the 'DV'."

Talk about a concept album...Tommy pulled out all the stops on this one - a blend of music and theater reminiscent of an earlier time when the music business had a lot more imagination and fun. On this make believe trip through "Big City" (New York), Tommy and his group, along with the listener, are given the key to the city, a private limousine, and a voluptuous female driver who takes them on the ride of their life.

This is Tommy James at his creative best. From "Give It All", a hard, up-tempo alternative rocker, to the dreamy "Who Do You Love" to "Megamation Man", a chilling glimpse into the demonic New World Order.

One would have to go back to the CELLOPHANE SYMPHONY album or perhaps TRAVELIN' to find anything remotely as daring or progressive.