"I think doing it on my
own label was probably the only
way all this music could have come
together in one package." 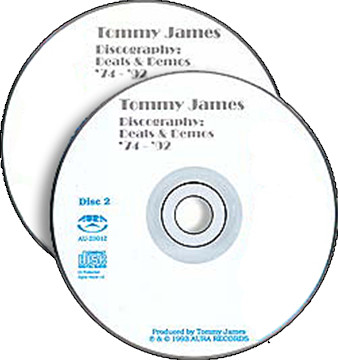 In 1993 Tommy started his own independently distributed record label AURA RECORDS. The rationale for starting such a company was simple...Tommy now owned a great many of his own master recordings and most of his publishing.

The first AURA release was a "double CD box set" highlighting the best of Tommy's post-Roulette career. It was called
TOMMY JAMES DISCOGRAPHY: DEALS & DEMOS '74 - '92,
and was a collection of all his singles and best album cuts from the five labels he had worked with since leaving Roulette... MCA, Fantasy, Millennium, Polygram/21, and Aegis.

As a special bonus, several never-before-heard demo tracks were added to the album to bring this time period to completion.

"I thought I knew the record business until I actually got into the record business...dealing with retailers, distributors, and promo guys, at such a street level, was quite an education. But it was a great feeling, finally being in control of the whole machine". -TJ