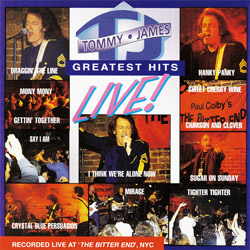 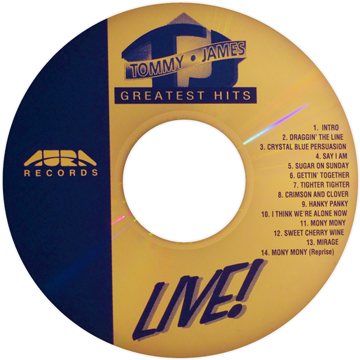 ...As I turned onto Bleecker Street in New York's Greenwich Village, I could see lines of people in front of The Bitter End. I approached the club and became one of the many fans huddled under the awning, waiting to step inside. Directly adjacent to the sidewalk were two huge mobile recording trucks, dwarfing the street and people below. One truck was marked RECORD PLANT 48-track Remote Unit and the other was equipped with full video gear, complete with satellite antennas and dozens of high-tech monitor screens. Something big was about to happen!

I began to grow anxious in anticipation of seeing one of my all-time favorite rock acts. Suddenly the doors flew open and instant excitement was everywhere! This was a magic night - an historic night even by New York standards! This was the night Tommy James was to take the stage where the likes of Bob Dylan, Richard Pryor, and so many "Greats" had gone before, to record his GREATEST HITS LIVE! album, and we were all going to be part of it. As I looked around the infamous "brick room", I realized these were not just your average fans off the street - oh, there were plenty of Village Kids but also a fascinating assortment of industry big-wigs, DJ's, TV news people, record company execs and lots of musicians.

One thing was clear... Tommy James had hard core fans from all walks of life, and keeping them excited for over thirty years is no small task - not in this business! The next two hours consumed me in an awesome performance - all those great songs, each done to perfection. Tommy James, the master of Pop Hits, and his incredible band, doing the sound track to our lives right in front of us!!

Now, finally, all Tommy's fans can experience this unforgettable night - it's all here - the show, the crowd, the excitement and energy...everything!

So sit back and enjoy this captured moment in rock history.