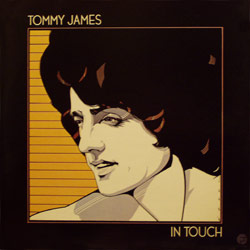 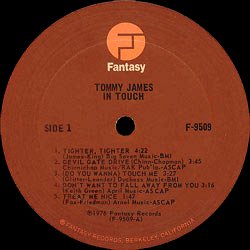 IN TOUCH was the first of two albums Tommy produced for the San Francisco based FANTASY RECORDS. Recorded in the autumn of 1975 at the Fantasy studios in Berkley, it represented not only a geographical change for Tommy, but also a chance to explore new musical territory. Using some of the best Bay area musicians along with Tommy's own team (his touring band plus co-producers Ritchie Cordell and Kenny Laguna), the album became a potpourri of styles ranging from 'Punk Rock' to 'Christian Contemporary'.

For the first time since the IT'S ONLY LOVE album, Tommy recorded 'cover versions' of songs by other artists: "I Love You Love Me Love" and "(Do You Wanna) Touch Me" by Gary Glitter..."Treat Me Nice" by Elvis Presley..."Don't Want To Fall Away From You" by Christian songwriter Keith Green and even a ballad version of "Tighter Tighter" which Tommy originally wrote and produced for "Alive N' Kickin' " five years earlier.