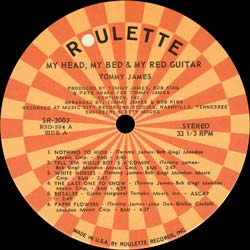 MY HEAD, MY BED & MY RED GUITAR, recorded in Nashville in the summer of 1971, was hailed as a masterpiece by Rolling Stone Magazine. This album was still another example of Tommy's willingness to put himself in new and unusual musical settings to see what would happen. Produced by Tommy, Bob King and steel guitar legend Pete Drake, it featured some of the greatest country music players of all time including Elvis sidemen Scotty Moore and DJ Fontana, plus Charlie McCoy, Pig Robbins, Buddy Spicher, Buddy Harmon, Russ Leslie, Dave Kirby, and The Nashville Addition (from the hit TV show "Hee Haw").

Nashville really rolled out the red carpet for Tommy and the result was a truly magical album. Both singles from the LP, "Nothing to Hide" and "Tell 'Em Willie Boy's A Comin' " were chart busters and left no doubt that Tommy James had made it as a solo artist.