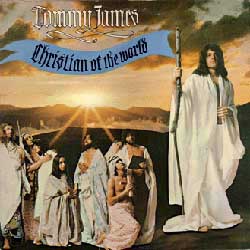 CHRISTIAN OF THE WORLD
1971 - Roulette Records 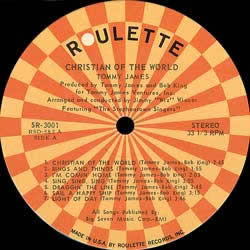 CHRISTIAN OF THE WORLD was a total departure from anything Tommy had ever done before. While it's true, other 'mainstream' pop and country performers had, on occasion, recorded traditional Gospel music...no other rock artist had ever attempted anything as bold as an album of new 'Christian oriented' songs. Today this genre would be called Christian Contemporary, but in 1971, the year of its release, this was unheard of.

Musically the album was a mixture of serious religious themes encased in Tommy's well known pop style and featured many of the studio players and singers Tommy had used successfully on earlier recordings. The LP produced three more hit singles "Adrienne", "Church Street Soul Revival" (A song Tommy originally wrote and produced for the group EXILE, released on Columbia Records) and the monster "Draggin' the Line".