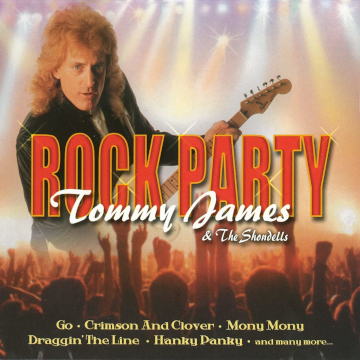 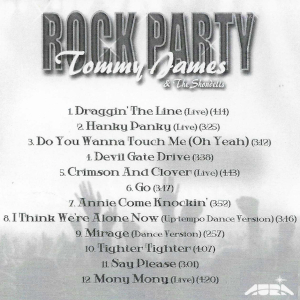 WE NEED TO SMILE AGAIN...

The times demand it. Throughout his career, Tommy James has been doing exactly that. Making people smile... Making people dance... Making people groove. It's more than just the 23 gold singles, 9 platinum albums, 100 million records sold worldwide, 32 Billboard 'Hot 100' hits and, most impressive of all, the long string of hits heard on the radio over 21 million times.

Are you ready to smile again? One listen to his new ROCK PARTY takes 10 well-known slices of Americana, plus two surprise deep-cuts from the '90s - highlights 'ANNIE COME KNOCKIN' and "SAY PLEASE" - remixed/revitalized, adding oomph, spark, crowds and thrills to the point where the ones you know like DRAGGIN' THE LINE, CRIMSON and CLOVER, MONY MONY, I THINK WE'RE ALONE NOW and more add up to a frenzy of rock'n'roll craziness just like when we were all kids. And that's just it. This music is teenage music, Tommy James never grew up. He's still singing HANKY PANKY like he was 16 again when he first realized that, yeah, his baby does the hanky-panky. We should all be so lucky.