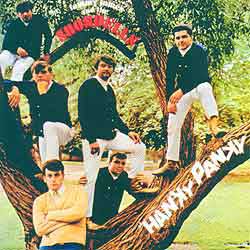 "We were the wrong act...
with the wrong record...
at the wrong time!
Where did we go right?" 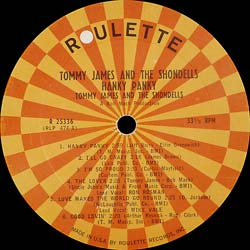 As funny as that sounds, in many ways it's true, but the meteoric rise of Tommy James & the Shondells that summer of '66 was surely one of the greatest "Cinderella Stories" in rock history.

Hanky Panky, an obscure single recorded two and a half years earlier by Tommy and his high school rock group THE SHONDELLS, in his hometown (Niles, Michigan) - suddenly out of nowhere became a #1 record in Pittsburgh, PA.

At the behest of several local DJ's and promo people, Tommy was tracked down and urged to come to Pittsburgh to perform and do interviews.

Unable to put the original band back together, Tommy went alone and chose a Pittsburgh group playing clubs as "The Raconteurs" to be the Shondells.

Two weeks later, Tommy and the new group signed a recording contract in New York with Roulette Records... and the rest is history! Hanky Panky became the #1 record of the summer and the dream of a lifetime came true for Tommy and the Shondells!

Roulette needed a "HANKY PANKY" album fast, so the group quickly headed for the studio with A&ampR man Henry Glover at the production helm.

The album was finished in a break-neck two weeks with a combination of quickly thrown together group originals and cover material including a re-do of "The Fireballs" "Say I Am", which became their second million-selling single - the album itself going gold a mere four weeks after its release in July of '66.